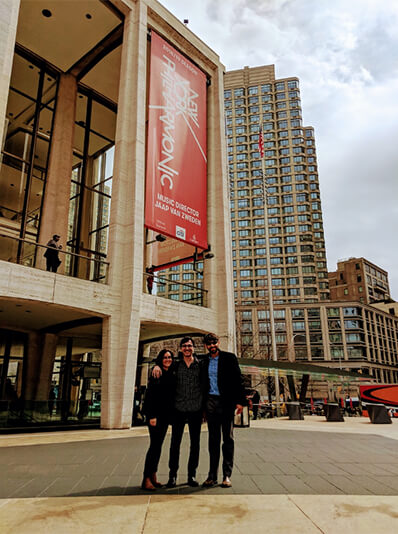 As we leave La Guardia Airport and take the bus to what will be our six-day residence in Manhattan, our conversations already start reflecting how this experience is going to be different from anything we have done before. We mention Gustav Mahler and Leonard Bernstein, whom we have been studying as part of our research plans as a group. However, the surroundings also lead our talk towards hip hop, jazz, musical theatre, and even salsa.

Most of us had already been to New York as tourists, but when you have been preparing for weeks to do your individual and group projects, knowing that you will physically witness the places where it all happened, that you will soon have in your hands documents and manuscripts of those who have been so influential, it all transcends to a whole new level.

We finally arrive at our Harlem home after a long day of traveling from Tucson and immediately notice a plaque close to the door: “Here Lived 1939-1940 ‘Jelly Roll’ Morton, ‘Originator of Jazz-Stomp-Swing, Composer-Bandleader-Pianist.'” Coincidentally, on our way from the airport we had just talked about the film, “The Legend of 1900,” which includes scenes on Ellis Island during the beginning of the 20th century and has Morton’s music as part of the soundtrack. This was just the beginning of similar or more profound experiences that were about to come across over the next few days.

Before Our Arrival In New York

When the call for applications was first announced at the Fred Fox School of Music, the title “Field Experience in New York City: New York Philharmonic Orchestra and Archives,” sounded very appealing but at the same time somewhat intimidating, especially because it involved an individual project whose fieldwork had to be completed by the end of that week. But we all knew this was one of those unique opportunities that we just could not afford to ignore. 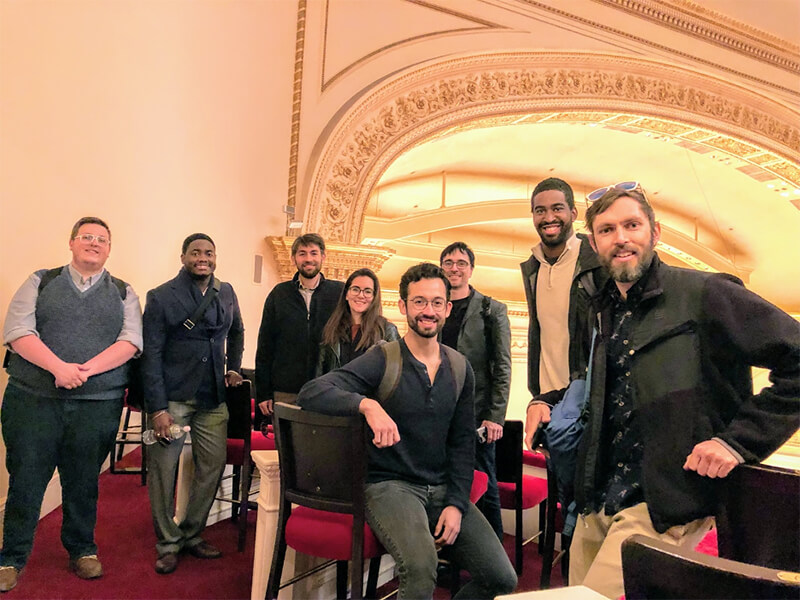 Dr. Mugmon carefully planned our schedule for the week, which included time for us to pursue our individual projects as well as a group project identifying places in New York City that were connected to Gustav Mahler during his stay in America, to be our contribution to the New York Philharmonic walking tour. This was all part of an exciting collaboration with New York Philharmonic that gave us the opportunity to study the history of the city and its musical environment at the beginning of the 20th century.

More Than A Field Experience 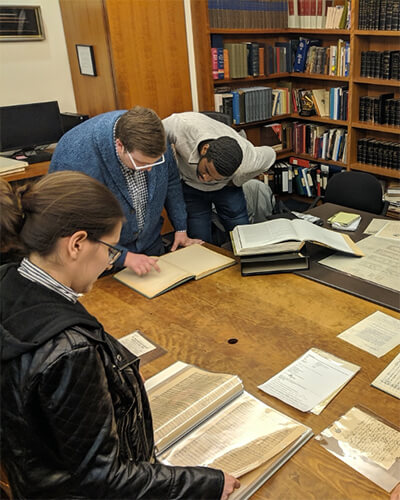 By the end of the first day at the New York Philharmonic Archives, we already had the experience of examining a score that Leonard Bernstein used for one of the performances of Mahler’s Sixth Symphony he conducted, scores used by Mahler himself, and several letters and documents connected to Mahler and other relevant composers. At Carnegie Hall, we had the very rare opportunity of holding a Beethoven manuscript page in our hands, of exploring different documents that included autographs and notes by Stravinsky, Hindemith, Menuhin, and many others, and of holding batons used by many conductors like Bernstein, Toscanini, or Karajan.

We also visited the Morgan Library and saw the autograph manuscript of Mozart’s “Haffner” Symphony.  After listening to an amazing performance of Mahler’s Sixth Symphony by New York Phil, we met the conductor Simone Young, who shared with us some of her experiences as a professional musician and as a student.

During the six days of group activities, we had to schedule time for our individual research projects, which included research that was centered on collections held in libraries there, but whose topics were not necessarily directly related to New York. Some pursued projects related to our group work on Mahler in New York, like Mariana’s project on arrangements made by Mahler of J.S. Bach music.  For other students, work involved visiting different archives like Grant’s project — which I thought was particularly interesting.  He studied Ulysses Kay, a Tucson-native composer whose archive is housed at Columbia University. 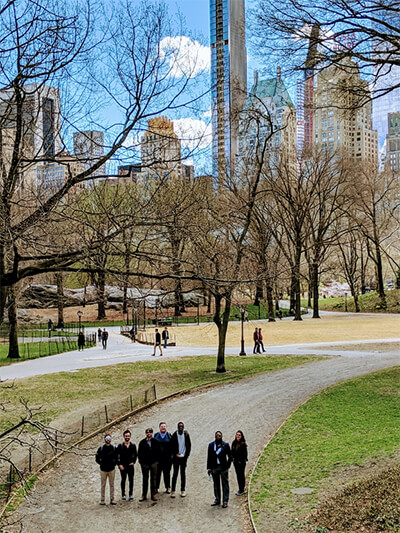 All the intense work we accomplished during our time in New York City was a life-changing experience, not only because of what we learned but because we learned it right where it happened and because we were wisely directed to observe details that otherwise would not have been obvious.

By the end of our trip, we knew we had walked in the footsteps of Leonard Bernstein and Gustav Mahler around the city and had a multidimensional encounter with music, art, and culture just like they did in their time. We were immersed in the same rich, vibrant, multicultural environment that can only be absorbed through direct contact and that otherwise we could only wonder about.