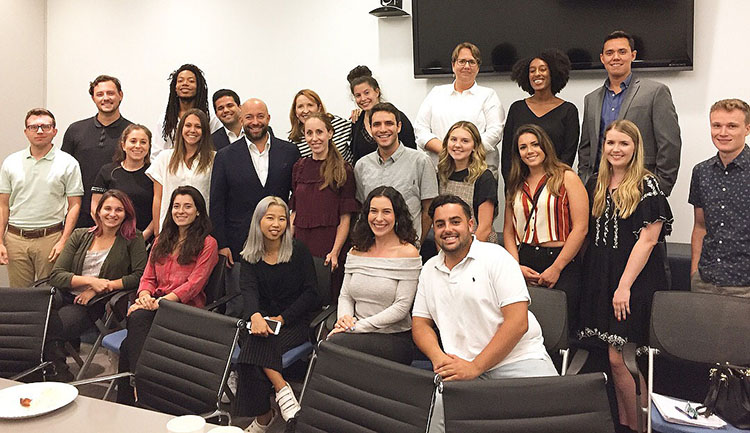 When Brad Slater was a youngster, he thought he was going to be playing baseball forever.

But that dream changed when he arrived on campus at the University of Arizona.

“That ran its course when I showed up to Arizona and they were number two in the country, so that’s when I knew I was going to dedicate myself to the movie business,” he said.

Since earning his degree in Media Arts from the University of Arizona in 1996, Slater has had a successful 20-year career in talent representation. He currently is a senior partner and motion picture talent agent at the prestigious William Morris Endeavor Agency, where he represents some of the biggest names in the industry, including Lebron James, Dwayne “The Rock” Johnson, Kevin Costner, Octavia Spencer, Ronda Rousey, Michael Strahan, and Odell Beckham Jr.

Partnering on programs with the Hanson FilmTV Institute and the School of Theatre, Film & Television, Slater has taken his successful career experiences to help the next generation of Arizona students, who are interested in breaking into the entertainment industry.

For his outstanding career achievements and his unwavering dedication to the College and its students, today, Brad Slater is being honored by the University of Arizona Alumni Association as the 2019 Alumnus of the Year for the College of Fine Arts.

“It is a tremendous honor,” Slater said. “I was very, very flattered, humbled, super surprised, to be honest, when I got the call. It’s great. I hold every experience that I had at that school very near and dear to my heart. It was an unbelievable four years going there.”

One experience in particular stands out in his mind. He went to a free movie on campus.

“The Last of the Mohicans.”

“I was with my buddy Garrett Feldman and, and it was unlike anything I’d ever really seen. It was my freshman year, and I remember walking out of the theater with him and just being so riveted by the movie. I was just blown away. Blown away. And I felt like it was such like a grown-up movie going experience. And I said, this is what I have to do and I have to find a way to do it.”

Slater didn’t have many connections in the industry.

“This is all pre-internet too. It’s weird. Nowadays you can reach anybody if you want to drop them an email. Right. And back then there was no such thing, I was faxing my resume into people’s homes, if I could get my hands on their phone number. So, it was fun. I really had to find my way.”

He got his break initially as a manager before becoming an agent. That was 19 years ago, and he remembers how difficult it was to break in to the business. He recalls receiving advice from his mentor, noted agent Nick Stevens.

Now Slater is in position to mentor the next generation, specifically students from the University of Arizona. His Twitter profile proudly declares his loyalty: “Arizona Wildcat No Matter What.”

“I’ve paid close attention to how hard it’s become to get to pick your path when you graduate college in terms of finding something that excites you. I was fortunate enough to have people that believed in me and who were able to open some doors and, showed me the way and took a chance on me. And so, I’ve just felt that because I was fortunate to have that that the right thing to do is give it back.

“People who demonstrate a desire to be in this business in any way, I want to be as helpful as I possibly can.”

In 2018 and 2019, Slater hosted the Summer Internship Roundtables, co-presented by the Hanson FilmTV Institute and the School of Theatre, Film & Television. The roundtables, taking place at WME’s Beverly Hills headquarters, provide invaluable real-world experience outside of the classroom to Arizona students, who are interning in the Los Angeles area.

“It’s really just an open table to talk about anything and everything. Talk about the experiences that they’re having currently with the internships, how is it going, how to navigate them. I talk about what I do in case if there is interest to jump into the representation side of the business. And then we just open it up with a lot of questions and I speak really candidly and give open and honest answers.

“There are students who are doing everything from working in PR firms to law firms, to management companies, talent agencies. There’s usually one or two who are trying to be actors. So, we really get to cover a lot.”

In addition to being the key speaker, Slater enlists the help of other Arizona alumni who work at WME.

“We’ve got more than just me that went to the University of Arizona who work at this company. They come in — they’re all from different departments in the company – and talk about their jobs. And it’s really gratifying.”

His clients, successful actors and athletes, are similarly diverse, but there are common characteristics that flow through all of them that students can take note and emulate.

“Believe that your best is good enough.”

“I say to my clients, ‘Believe that your best is good enough.’ It’s a little different than always giving your best. I work with people who are relentless about hard work over just having talent, right? None of them are just showing up and going through the motions to get through their day. And I don’t either, you know? I believe there’s a sign that hangs in the weight room at the Arizona football complex that says, ‘Hard work beats talent when talent doesn’t work hard.’

‘It’s a lot harder to fail when you know that you’re doing that. The people who I have been lucky enough to work with over the years, and not just clients, just people who’ve been successful usually are a couple of clicks to the right than everybody else.”

Finally, Slater offers the following advice for his fellow alumni.

“I think you use the phrase, pay it forward. If you had a great experience at the school, there’s a ton of young people that are going to be on a journey to fulfill the rest of their lives professionally and personally. There’s plenty of room to help people out and shine a light or paved the way to help with people’s future. I would encourage it.”