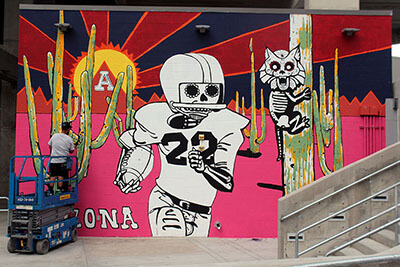 Underneath the bright lights of Arizona Stadium, a never-before-seen sight emerged on Saturday.  Standing over 10-feet-tall, a black-and-white skeleton wearing a football uniform and surrounded by bold Tucson-esque colors, was unveiled to the public.  It is at Arizona Stadium to stay, painted on a wall near Gate 6 of the stadium.

Danny Martin, a Tucson artist and Arizona alum, unveiled his newest mural shortly before the kickoff between Arizona and Texas Tech on Sept. 14.  The mural, which is stylistically inspired by The Day of the Dead and Tucson’s All Souls Procession, displays Martin’s love of Tucson and UA football.  According to the plaque that accompanies Martin’s mural, the project was “commissioned to explore themes directly related to the vibrant cultural heritage of the Southwest and the history of Arizona football on campus.” 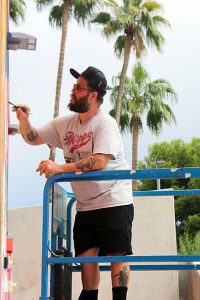 The main subject of the mural, a skeleton sporting football gear, is surrounded by saguaro cacti and wearing a jersey with the number 22 on the front.  The number, which was worn by UA football player Art Luppino, was not picked randomly. For Martin, using Luppino’s number was his way of incorporating Tucson’s storied past into the mural.  Luppino, who earned two consecutive NCAA rushing titles during the 1950s, is one of only nine players to have their jersey number retired by the University and is a member of the UA Sports Hall of Fame.

Martin said that he hopes the mural provides viewers a “genuine reflection of Tucson and the University of Arizona Stadium,” but he does not mind if people just want to stand in front of the mural and just take pictures.  “There’s always going to be a hopefully deeper conceptual meanings, but then it’s also really important for me that there also be a surface-level entertainment appreciation level,” Martin said.

Martin, who has created over 100 murals, graduated from UA in 2008 with a Master of Fine Arts in Printmaking.  According to Martin, he was drawn to printmaking because of how accessible it is as an art form.

The appeal of printmaking is, to Martin, “being able to keep your price point low, and having a lot of multiples.” But, more importantly, his degree was also what allowed him to become a full-time artist.  “My degree actually allowed me to stay in Tucson – because I was able to teach for 10 years – until I was actually able to make a complete living off of just my art.”