Documentaries: Cooking in the crock pot

“Documentary filmmaking is more like cooking in the crock pot instead of the microwave,” she explained with a laugh. “It takes time to build relationships, trust and access.”

Beverly gave that apt analogy to a newspaper in Ohio, the Yellow Springs News.

She’s been on the road promoting her documentary film, “Hippie Family Values,” which continues to screen nationally and internationally and is garnering awards. To date the film, a feature-length documentary about three generations at a back-to-the-land community in rural New Mexico, has had 20 screenings around the country.

A Professor in the School of Theatre, Film & Television, Beverly is an accomplished documentary filmmaker and an expert in documentary and social impact. She has several ongoing projects that are all doc-centric.

“For me personally, I guess I have always been fascinated by the diversity and specificity of real people’s lives and experiences, and find the drama going on all around us more compelling than made-up stories,” she said. “It is no accident that I was studying anthropology and living in Morocco when I became involved in doc filmmaking.

“And when I discover excellent films on issues about which I am passionate — immigration, the plight of refugees, LGBTQ rights, climate change, to name a few — I feel compelled to share those films with audiences who want and need to see them, through public film screenings and using them in courses.”

So, naturally Beverly is leading the effort to establish the Center for Documentary initiative; one of the center’s first projects is DocScapes, a collaborative project with the Hanson FilmTV Institute.

On Nov. 20, DocScapes presents Waking Dream, a timely docu-series about DACA recipients in limbo. In attendance for a post-screening panel will be filmmaker Theo Rigby, series subject Marisol, and Darío Andrade Mendoza, a DACA recipient and graduate student at the UArizona Electrical and Computer Engineering Department. The event is free at the Gallagher Theater (6-8p) in the Student Union.

Why is the craft of creating documentaries important for today’s Arizona students?

“In an era saturated with virtual “experiences,” when students are increasingly more engaged with their devices than the people around them, the documentary filmmaking process connects them to real people and stories unfolding in their own community. It requires that they think deeply about the ethics of what it means to be invited into people’s real lives with your camera, and the daunting and humbling responsibility of representing them as truthfully and respectfully as possible.

“Making engaging stories with documentary films has the potential to make us more empathetic and aware and active neighbors and citizens.”

While Beverly herself considers her view “hopelessly idealistic,” she is a living example of how this process can manifest, drawing attention to issues and people who are interesting and important to her, like in the film “Hippie Family Values.”

Beverly wanted to dispel negative stereotypes about hippies, while telling the story of these individuals living in a communal setting. Over a 13-year period, the story that began with the ideals of the 1960s turned to how the original inhabitants are now coping with aging, healthcare and end-of-life issues.

“Now the elders are on Medicare,” she said.

The film shows how the people work and live together in a community, splitting up chores and making decisions together that affect the group. It also focuses on younger generations, the adult children of the hippie elders and grandchildren, who grapple with whether they should continue in the community or live elsewhere.

“Finding the audience for this film has been much more difficult really than an audience for “Laramie Inside Out,” which was clear,” she said of her 2004 diary/documentary about the aftermath of Matthew Shepard’s 1998 murder in her hometown community. That film had its U.S. broadcast premiere on PBS in June 2007.

“It’s not issue-driven per se. It’s an ethnographic slice of life over a long time through a countercultural lens in this particular landscape about the giant questions of life and death, right?

What does it mean to live a life of alternative values? Is this the environment to raise a child? Where do you want to be when you die?

Fortunately, Beverly knows how to find her audience, whether its family studies, gerontology, women’s studies, U.S. history of the counterculture, anthropology or community-based conferences that deals with similar issues.

“I loved teaching “Hippie Family Values” in my big gen ed class,” writes Professor Laura Briggs of the University of Massachusetts-Amherst. “Students were riveted by the idea of utopian politics, of building a community to prefigure the world as you want it … the film moved my students, encouraged them, gave them hope.” 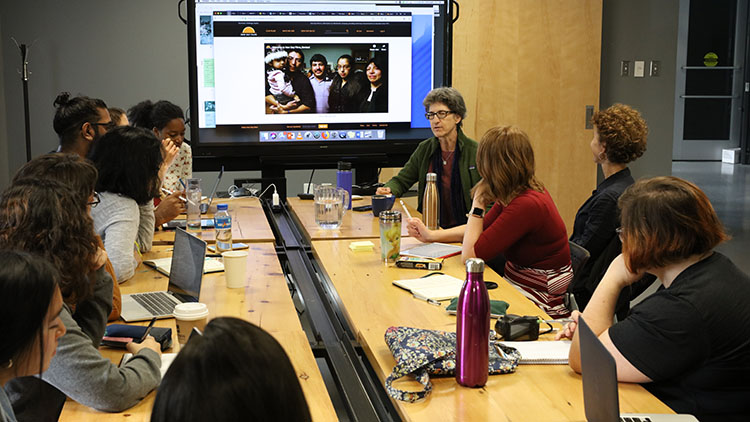 And Beverly has held screenings at locations from Delaware to California.

Beverly promotes the film to the educational world through New Day Films, a filmmaker-owned distribution company for social issue documentaries that she’s been a member of for 15 years … her own experience of co-op living like the people in the film.

“People making decisions by a participatory democracy and actually getting things done,” she says.

After spending all of those years at the ranch, Beverly developed many lifelong friends. Has she ever considering living there?

“The slippery slope between observation and participation,” she said.