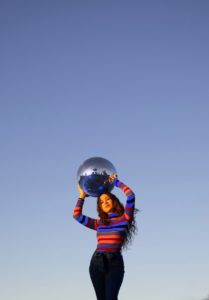 In a year in which producing films seemed all but impossible, our Film & Television students adapted. Adhering to strict safety protocols, they learned how to bring their stories to the screen in the middle of a pandemic. University of Arizona School of Theatre, Film & Television student Alexandra Cerna (BFA, 2021) is one of the seniors presenting in this year’s I Dream in Widescreen, the annual showcase of undergraduate thesis films. Between having to postpone filming and re-writing her entire script, Alexandra overcame her share of obstacles to pull together her final film.

“[The COVID-related delay] honestly was a blessing in disguise because more pre-production is always good, so now I can just work on perfecting it even more,” Cerna said. “I just had to look at it in a good way because I was like, ‘I can’t constantly be disappointed.’”

Cerna’s film Treasures Beneath My Tree will premiere at I Dream in Widescreen 2021 in person for free at the Cactus Drive-In May 8, and streaming online for free through The Loft Cinema May 8 – 22.