Dr. John Milbauer made the most of his recent leave of absence, earning a Master’s in Public Administration from Harvard University’s Kennedy School of Government with support from the College of Fine Arts and the Provost’s Office.

Milbauer, an acclaimed pianist and professor of piano for over 25 years, decided to take a leave of absence after analyzing his career and looking at what he wanted to pursue next. 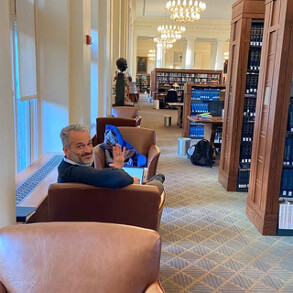 Studying in Harvard Law School’s library. In the fall, in particular, not a minute to spare.

“When you’ve been in the workforce for 25 years, you start to look around and think about what you’ve accomplished and what you can do now to have more impact,” he said. How can your work be more engaging and better to those around you?”

Milbauer wanted to keep one foot planted, not leaving music and Arizona, but to venture out to an adjacent possibility, whether that be related to the arts, higher education, or not. The one-year MPA program at the Harvard Kennedy School was the perfect fit, designed for mid-career professionals from around the world seeking to make a difference.

Milbauer truly enjoyed being immersed in the learning environment again.  He was inspired by regular contact with such public figures as Cornel West, Samantha Power, David Gergen, Ricardo Hausmann, Wendy Sherman, Raj Chetty, and especially his advisor Ron Heifetz and connected with every one of his 190 classmates, with one-third coming from developing countries and/or emerging democracies whose institutions were still in formation.

“It was a joy. I didn’t have to worry about stuff and only needed to absorb as much as I could and meet as many people as I could. “I have never been busier, but I loved being a student and am trying to hang on to that. I’m currently taking Spanish right now at the university.”

Did he play a piano while in Cambridge?

“I had thought that I would carve out an hour every day to practice, but after a lecture by Brian Mandell, he told us to not reinvest in our old career. All students in the program come in with 20 years of experience, but Mandell explained that it was simply one year of experience times 20. I knew that if I wanted this to be a year of change, I needed to move away from the piano. I suspected the technique would hold up and it did, it is back and maybe even better than before.”

However, being a skilled musician definitely prepared him for this different degree. “Many musicians are good with numbers, math, data, whether there are quarter notes or eight notes or poverty levels in Ethiopia. It was very easy to transfer my skills since the biggest was the facility with numbers and patterns and recognizing what we’re so used to looking at with data and graphs, such as treble clefs and bass clefs.” 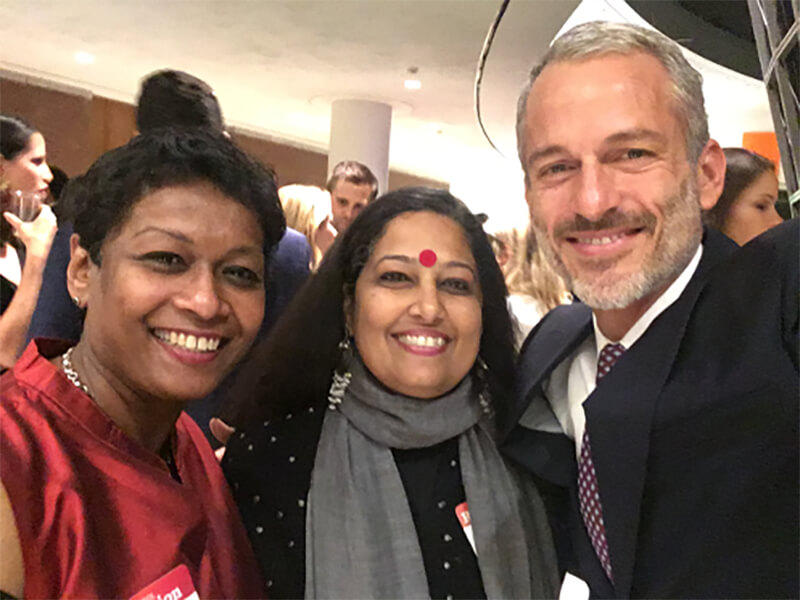 The Kennedy School fall reception, with friends from India and Sri Lanka.

Notwithstanding the vast amount of new knowledge learned, Milbauer gave three important takeaways from his time at Harvard.

In addition to being a John F. Kennedy Fellow, Milbauer was also Co-Chair of the HKS Arts and Culture Caucus as well as Associate Editor of the HKS LGBTQ Policy Journal.

“I had a fantastic experience with both,” he said. “With the Caucus, I explored the relationship between arts and public good and analyzed how the arts impact society.”

After a lecture on human rights and racism by Cornel West, Milbauer follows up on a question about James Baldwin and Nina Simone.

“Knowing that 70 countries in the United Nations still criminalize homosexuality made me realize how there is still plenty of room for capacity building in the LGTBI sphere here,” he said. While he was eager to be involved in the policy journal, he also reconciled that aspect of himself in a way that was “empowering.”

His advice to students looking to broaden their interests was simple.

“The musicians who have longevity are the ones who have intellectual curiosity. “We in the arts have so much to learn from and share with other fields and other parts of the world. This was an extraordinary opportunity.”