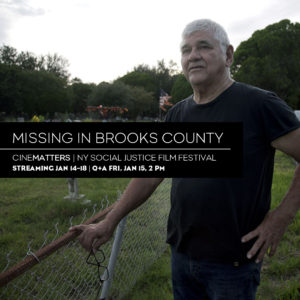 Missing in Brooks County continues its phenomenal festival run at Cinematters: NY Social Justice Film Festival. The festival’s mission is to present impactful films that engage the community toward a more democratic, inclusive, and just society.

Co-directed by Jeff Bemiss and TFTV Adjunct Instructor Lisa Molomot, and edited and produced by TFTV Associate Professor Jacob Bricca ACE, Missing in Brooks County is the product of five years of research and filming that chronicles migrant struggles in one of the most dangerous corners of the United States.

Thistle while you work, because it's almost thyme for Spring-Themed Virtual Art Trivia Happy Hour! Make sure to register below, muddle yourself a refreshing mint julep (see: recipe in confirmation email), then join us on Zoom at 5:00 MST for a blooming good time! 🌷
arizona.zoom.us/meeting/register/tZMvc-6spjojHNJsNMJyRpCG_Ciuq2FGbOEB?fbclid=IwAR2YDOeQY6P5aq1DtB... ... See MoreSee Less