I Dream in Widescreen 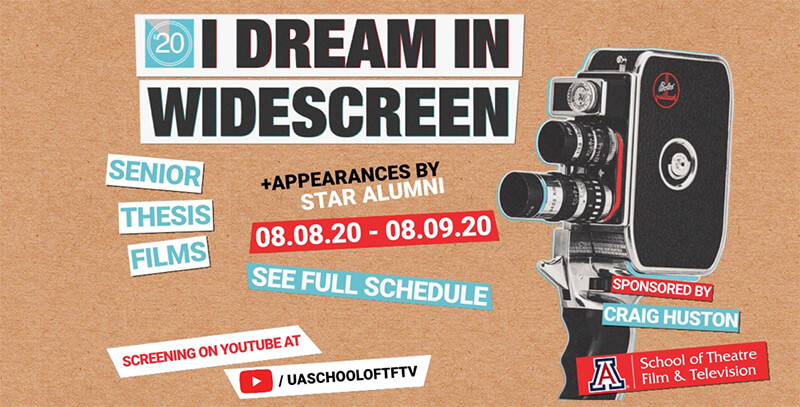 The School of Theatre, Film & Television’s annual showcase of undergraduate thesis films, I Dream in Widescreen 2020, will be presented on the school’s YouTube account, Aug. 8-9. This year’s event will include a series of sidebar conversations featuring film & television luminaries, all Arizona alumni.

Q & A with Rising Stars 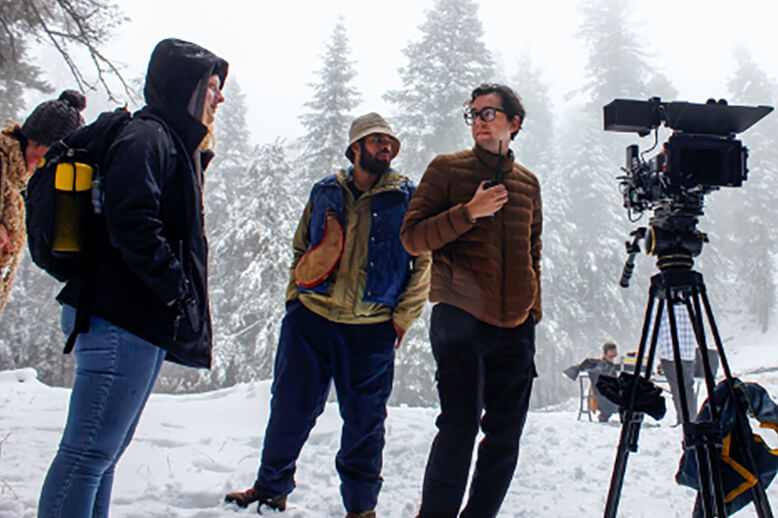 Director Anthony Cutrone (right) talks with crew member Emma Sinex, while on the set of the A Hunger. The film, shot on Mount Lemmon, stars actors Lance Guzman (center) and Margaret Smith.

Learn more about four of the talented filmmakers and creative minds behind the films to hear stories about their backgrounds, films and creative process all during these uncertain times.

Scott Weber has earned Emmy awards for his work on the hit shows “Lost” and “Westworld.” In March, he got a last-minute assignment he never could have anticipated: He was enlisted to work on the sound mixing for 14 short movies created by senior BFA film majors for I Dream in Widescreen. 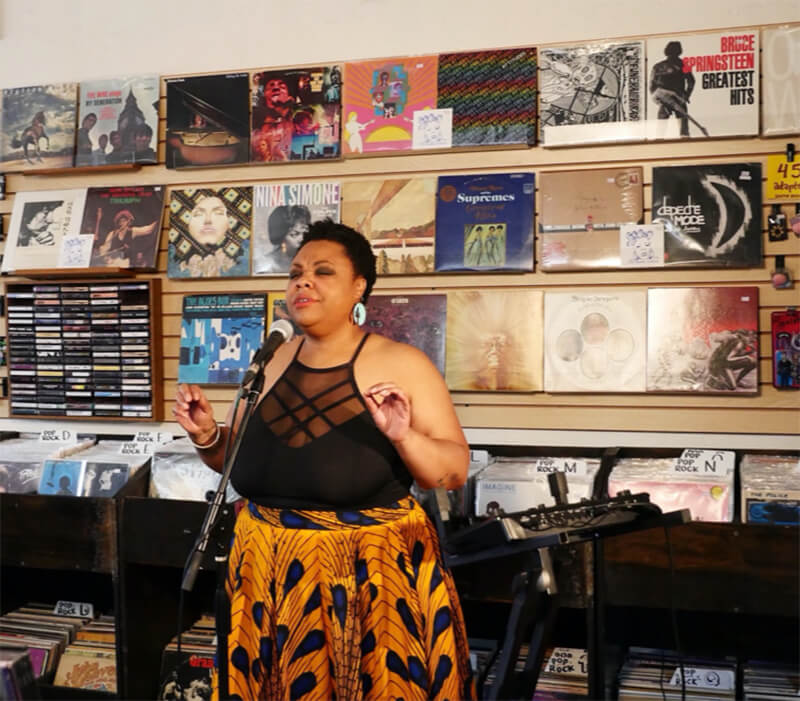 In this set, filmed on location at Wooden Tooth Records, Just Najima performed original and traditional songs, weaving in simple vocal loops and rhythmic elements to create what she refers to as “southwestern gothic soul.”

The Tucson Studio Concert Series continues with new performances recorded live on location at LandMark Sound Recorders, Wooden Tooth Records, and the Health Sciences Innovation Building at the University of Arizona. Performances premiere on Thursdays at 6p on The Tucson Studio website, where viewers can donate directly to the musicians.

University of Arizona President Robert C. Robbins confirmed last Thursday that the fall semester will begin as scheduled on Aug. 24, with a mix of in-person and remote instruction. More than half of all classes will include an in-person component.

“I know many of you are awaiting the answer to the question: Will the University of Arizona be open for in-person classes in the fall of 2020? The answer is yes,” Robbins said during a virtual briefing on the campus reentry plan.

The coronavirus pandemic, economic instability, systemic violence against QT+BIPOC, wildfires, and a highly-charged presidential election make 2020 a watershed moment for Tucson and the world.

How have you been responding, coping or healing through art during this time? Submit your work by Aug. 24 to be featured in the virtual exhibition Picturing 2020: A Community Reflects along with works from the UAMA permanent collection.

School of Art MFA student, Alex Turner is featured in the national photography journal, “Lenscratch,” including an extensive interview with Turner about his photo project, “Blind River,” and about his exploration at the border of imagery and technology in the Sonoran Desert. 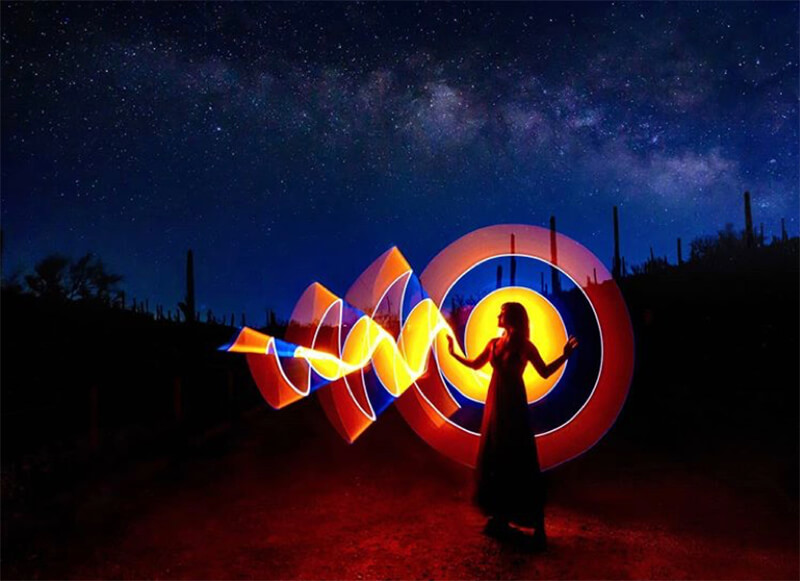 Music professor Kay He took this long-exposure photo at Gates Pass with the Milky Way as a backdrop. Fellow music prof Daniel Linder created the light painting. She used her phone to trigger the shutter.

“After I triggered the shutter, I threw my phone on the ground, and shouted to Daniel, ‘go go!’ He did the choreographed movement with a specially designed light tube (light painting device) by me.

“A lot of factors have to be aligned at exactly the right time, just like many performing arts. The process and practice of how to create magic is an amazing experience. The photograph is a reward of the frozen moment!” 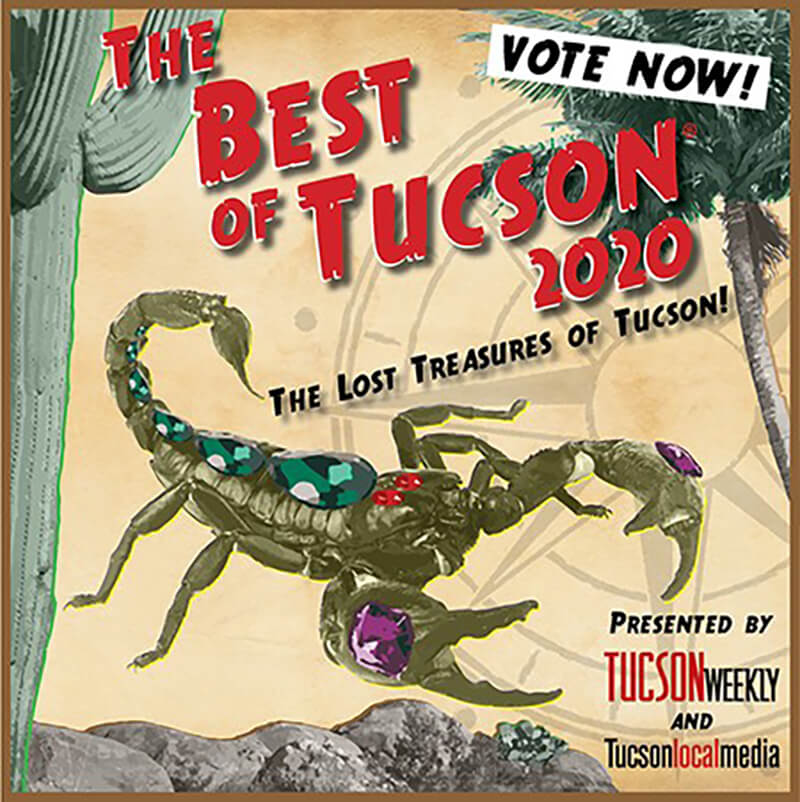 Tucson Weekly has begun its online voting for “The Best of Tucson 2020” awards now through Aug. 24.

An announcement about the future of UA Presents and its 2020-21 programming is coming in August. Tickets will go on sale at that time.

The School of Dance has postponed the Arizona Jazz Dance Showcase 2020. “We are closely following trends in case numbers and health guidelines. The Showcase may be rescheduled for Spring 2021.”

The School of Theatre, Film & Television has announced that there will be no public performances in the Fall semester. “We are exploring several performance alternatives for the Spring, and our decision will be made based on guidance from the University regarding how we can assemble at that time.”

Our friends at Broadway in Tucson rescheduled several upcoming shows:

School of Theatre, Film & Television presents “I Dream in Widescreen,” Navajo-Hopi Observer | 08.04
TFTV alumnus Christopher Nataanii Cegielski (’16) discusses his participation in this year’s I Dream in Widescreen and imparts advice to the Class of 2020.

Myth and The West, Arizona Illustrated | 07.28
School of Theatre, Film & Television instructor Cody Young, son of a Hollywood stuntman who worked with the likes of John Wayne, confronts the problematic legacy of Western films.

How the arts are surviving challenging times, AZPM NPR | 07.15
Arizona Arts in Schools’ Brad Richter is interviewed for “Arizona Spotlight” answering the question, “Can traditional performing arts survive in an online space?”

Alex Turner: Blind River, Lenscratch | 07.09
In-depth interview with MFA photography student Alex Turner about his exploration at the border of imagery and technology.

In the spring of 2020, a talented group of MFA graduates lost the opportunity to display their artworks in a physical gallery due to the pandemic. Today we begin to run it back with the 2020 MFA Thesis Alumni Exhibition.

Faye Ruiz's senior thesis film from "I Dream in Widescreen 2020" has been acquired for national distribution by Kino Lorber and DEDZA FILMS, who are featuring the works of nine emerging filmmakers from underrepresented communities worldwide.

“Dedza is committed to changing the landscape for emerging, underrepresented filmmakers and I’m elated to be a part of their first collection of short films and honored to have my film chosen to play on such a wide platform,” said Ruiz. “I’m grateful to The University of Arizona and the UA School of Theatre, Film & Television for providing me with the filmmaking resources and faculty mentorship to bring ‘The Lights Are On, No One’s Home’ to life and out into the world.”

Andres Hernandez is one of the many talented artists featured in the University of Arizona School of Art 2021 BFA illustration and Design Capstone Show. His thesis project was rebranding the National History Museum at Chapultepec Castle in Mexico City.

"This museum is one of my favorite places to visit while in Mexico City,” said Andrés. 'I decided to make it my thesis project because it would combine my love for design, art, my heritage, and history all in one project."

For more on Andrés, other artists and show, please visit bfacapstone.art.arizona.edu.