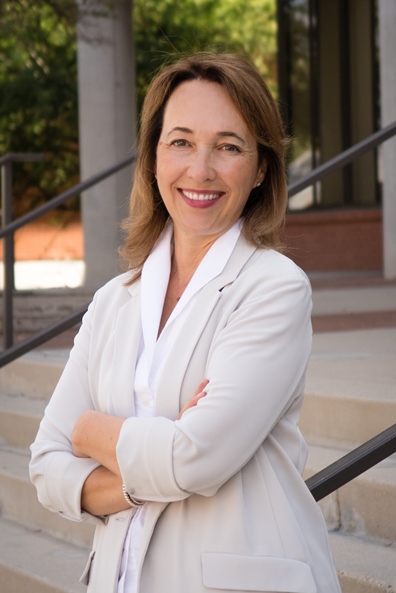 Great news: the School of Theatre, Film & Television’s theatre arts program recently rose 10 slots to a ranking of 33 out of 306 programs nationwide. The 2018 ranking, announced by College Factual, places our School within the top 10% of U.S. schools to study drama and theatre, and not surprisingly, it’s ranked the best in the state of Arizona.

Contributing to the quality of our theatre arts program and the preparation of students for careers are the numerous alumni who choose to return and give back to the School in different ways. Whether it’s to lead a guest workshop, participate in a Q&A, get involved in the annual Showcase of Talent, or to teach for a semester, our alumni show students a clear trajectory to the world beyond graduation.

Deanna Fitzgerald, our Associate Director of Theatre Programs, deeply values the contribution of alumni as she says they can speak about the transition into professional life in a way that students can relate to. They’ve been there, right where the students are now. 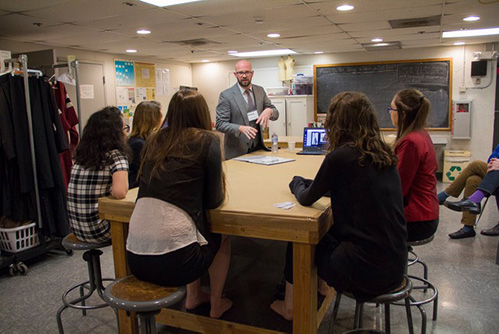 In the ten years since Kyle Schellinger graduated from the UA with an MFA in Design and Production with an emphasis on costume design, his costume design and technology work has been seen at the Utah Shakespeare Festival, Clarence Brown Theatre, Great River Shakespeare Theatre, and Lexington Children’s Theatre among many others. Kyle says he was compelled to return to his alma mater to contribute to the School of Theatre’s 2018 Showcase of Talent, the annual event at which students display their talents for an audience of directors, casting directors, and agents from Los Angeles, Chicago, New York and beyond. He participated in a panel and worked one-on-one with students on their portfolios ahead of the Showcase.

“The main reason I wanted to come back for the Showcase was because I know that those opportunities to present yourself to professionals are crucial,” Kyle says. “It’s important to me that the students show themselves, and the UA, in a really good light. I saw passionate students doing excellent work and who were receptive to the advice of someone a little further along in their career.” 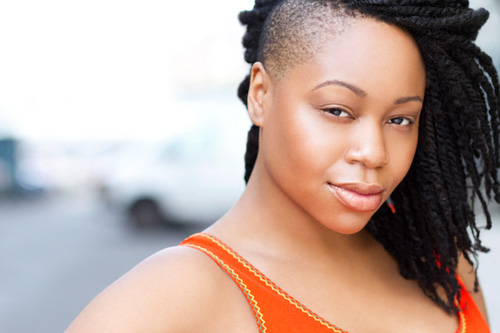 Broadway credits of Tamika Lawrence (BFA Musical Theatre) include The Book Of Mormon, Matilda, and If/Then.

Our theatre program has benefited from a wealth of alumni contributions in recent years, including Broadway actors Ben Crawford (BFA Musical Theatre), recently announced as the new Phantom in Broadway’s long-running Phantom of the Opera, and Tamika Lawrence (BFA Musical Theatre), both of whom have returned to lead Q&A sessions and workshops with students. Jessica Creager (BFA Lighting Design and Production), Assistant Lighting Designer on the Broadway productions Escape to Margaritaville and Dear Evan Hansen, returned to contribute to last year’s Talent Showcase.

School of Dance alumni are equally as passionate about giving back. Contributors include dancer/choreographer Marquez Johnson (MFA Dance), an instructor in the CFA In Schools Step Up Program, and also the Looking at Dance course. Hayley Meier (BFA Dance) had ended a 6-year run professionally dancing with the renowned River North Dance Chicago when she decided to return to the School to guest teach. 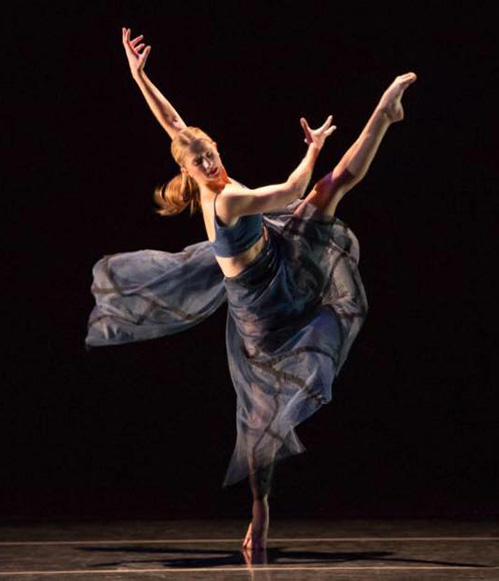 “It was my first time teaching at the university level and I had an immediate connection with students. I knew exactly what the program offered, having been through it myself, and could relate to them, as I’m not that much older,” says Hayley. That two-week guest teaching stint opened up a passion for teaching at the university level: Hayley now teaches Ballet 300 and will be performing alongside students in April in Boiling Point, the centerpiece of the UA Dance Ensemble’s Spring Collection. She remains inspired by her teachers whom she now counts as peers: Melissa Lowe, Elizabeth George, Amy Ernst, and Michael Williams. 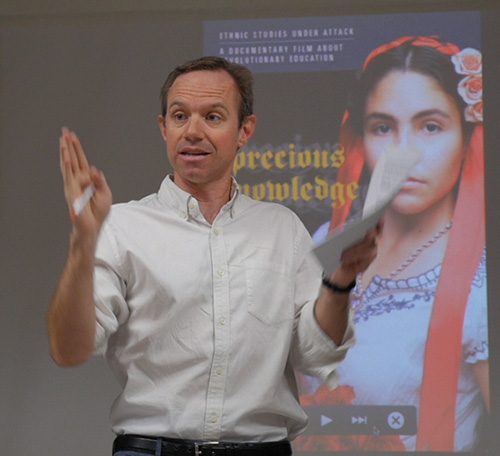 Part of the School of Theatre, Film & Television’s faculty of working professional artists, Assistant Professor Jacob Bricca is an award-winning film editor, producer and director. He has edited over a dozen feature films including Lost In La Mancha, the hit documentary featuring Terry Gilliam and Johnny Depp, the Independent Lens Audience Award winner Jimmy Scott: If You Only Knew, and the 2016 Sundance Special Jury Prize winner The Bad Kids. He teaches classes on editing and documentary and narrative filmmaking.

Jacob’s love for the craft of film editing, and turning students on to the power of editing, are what inspire him every day. “Most people don’t realize how much of an actor’s performance is created in the editing room. I get a lot of students in my Editing Fundamentals class who, understandably, don’t know the crucial role that the editor plays,” Jacob says. “When they see the starkly different ways that a simple scene can be put together, they are often blown away. There is a technical side
of it that must be mastered, but even more important is the intuitive side that lets an editor take ordinary material and really make it sing like a great piece of music. Learning how to actually master the craft is a deeply empowering experience.”

Jacob recently added author to his list of credits. His first book, Documentary Editing: Principles and Practice, was published earlier this year. The book has earned Jacob recent invitations to speak at conferences and universities as well as Film Independent, the influential Los Angeles- based organization that recognizes achievement among American independent filmmakers. 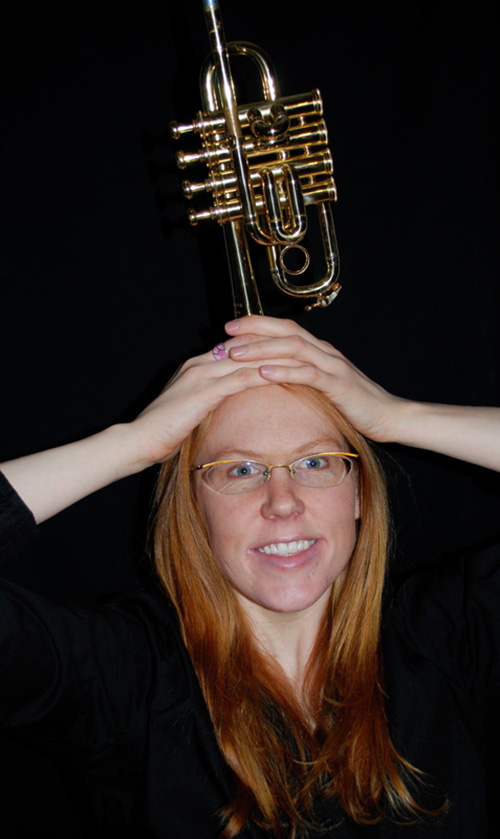 Amy Burmeister is the administrative associate at the Fred Fox School of Music. She says the best part about her job is connecting and collaborating with so many different people. She enjoys having the opportunity to work closely with the School’s talented students, faculty, staff and patrons. She loves meeting new people, sharing what is happening in the School’s concert halls and inviting guests to attend various events.

She is an alumna of the UA, where she earned a Doctor of Musical Arts degree in trumpet performance in 2015. Prior to her graduate work, Amy held positions as a band director both in Arizona and Minnesota. She remains active performing with various music ensembles, and loves spending time outdoors – Sabino Canyon is a favorite.

Tune in tomorrow (Thurs.) at 6p for the Pete Swan Trio ...Get ready for a swinging vid this week when we are joined by The Pete Swan Trio! Peter Swan, Robbie Lee, and Scott Krystyna Black met up with The Tucson Studio crew at the beautiful LandMark Sound Recorders studio for a memorable evening of jazz. With tunes ranging from Gershwin classics to creative & original treatments of jazz standards, this set will have you tapping your toe and snapping your fingers in no time.
Video will premiere this Thursday at 6pm on Facebook, Youtube, and thetucsonstudio.com
... See MoreSee Less

In 1978, mold-breaking queer artist Robert Rauschenberg collected objects near his Florida studio and used them to create a series of six "Publicons" - icons for the public. He envisioned them as stations, much like the Stations of the Cross observed by Christians, but they resemble religious objects in design only. In function, they are objects of secular "worship" and playfully comment on the superficiality that has replaced spirituality in American society.

Station I, which we are privileged to have in our collection, opens to reveal a canoe paddle painted with gold leaf and adorned with a blue light bulb. The patterned fabrics of the interior seem to represent the materialism of contemporary culture, with the blue light calling to mind the "blue light specials" held by retail giant K-Mart.