Fred Fox School of Music senior Jeremy Meeker-Hackett has completed his duties as the drum major for the Pride of Arizona Marching Band.

Only the top one percent of band members are considered for the role of drum major, a position responsible for leading over 250 people. And Jeremy consistently set and met high standards of excellence for himself and those around him, according to Director of Athletic Bands Chad Shoopman.

“Beyond his musicianship, Jeremy’s character is perhaps his most remarkable quality,” said Director of Athletic Bands Chad Shoopman. “He is always willing to do the extra work; the tasks that are often the least rewarding without complaint. Jeremy’s genuine good nature and desire to be great make him a joy to work with and someone who is looked up to and admired by those who have the pleasure of working with him.”

We asked Jeremy about his future plans, his thoughts on the power of music and the importance of music education. 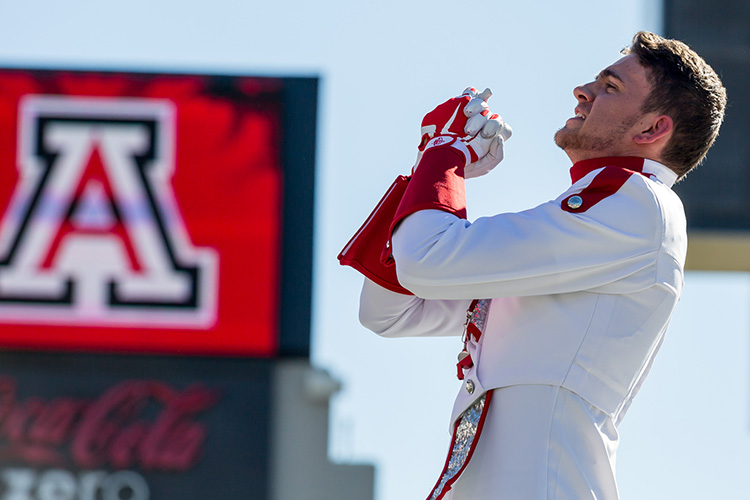 What did you enjoy most being the drum major and being in the Pride of Arizona?
Being in the Pride of Arizona was hands down the greatest experience in all my four years at the University of Arizona. When I joined my freshman year as a member of the drumline, I was fulfilling a dream from when I was 3-4 years old and had season tickets to the football games. My experience has been everything and more than I hoped it would be. Having the chance to be one of the only two athletic groups to perform in Arizona Stadium alongside some of my best friends is what I enjoyed most. Earning the position of drum major only heightened this experience.

What were your Top Five Favorite Moments being in the marching band?
My top five memories were performing our halftime show at an Arizona Cardinals game, travelling to San Francisco for the Foster Farms Bowl against Purdue, being recognized and receiving shout-outs from all four members of No Doubt, performing at my last UArizona Band Day this year, and travelling to California for the USC game and marching in a Disneyland parade. There were so many great opportunities and experiences, but these took the cake.

You’re probably the best person to ask this, what can you tell me about the power of music?
The power of music is almost indescribable. For me, this power can only be seen, heard, or felt. We talk about the transformative powers of music all the time, specifically being able to come to rehearsal and forget everything else going on in your life as soon as you step on the field. Just as with many other tasks, performing requires 100% commitment at all times. The only way you can make a difference to yourself and those you’re performing for or to is by committing yourself fully. Participating in multiple art forms everyday really has made me realize truly how much it takes to generate that power. Every form of music has their differences, but they all share the same transformative power. This power is why I do what I do every day and why I am studying music. This same power is what has driven me to write songs in my free time. One of my hopes in life is to make a positive difference in someone’s life through the music that I write. To have that gratifying experience would be the highlight of my musical career.

You were in Mamma Mia recently. What do you get out of the musical theatre experience?
Similar to the previous question, the power that comes from expressions and emotions translated through music is what pulls me in. There is something to be said about the connections and friendships made with those that you often share very intimate, emotional, and exhausting relationships both on and off the stage. This style of performance is undoubtedly the most raw and exposed art form as it magnifies issues from all agendas through live interactions with real people. Through the arts, many of us find empathy and musical theater does just that. If I can make a positive difference by way of empathy and music, then I have found my calling. Musical theater is where my heart truly lies which is something that has slowly formed over the past four years from the experiences I have had in the theater community.

What are your post-graduate plans? How would you like to use your degree?
The first thing I plan (or at least hope to do) after graduation is to participate in the Disney College Program at Walt Disney World in Orlando, Florida. While I’m there, I hope to be a part of the entertainment department in addition to attending master classes and getting to know people in the music department. From there, I will hopefully have finished writing/composing my musical and begin working on having it produced. At the same time, I will be doing all I can to have as much exposure and experience with song writing in the musical theater world. With my degree, I plan to lead community or school musical productions as a conductor and/or music director.