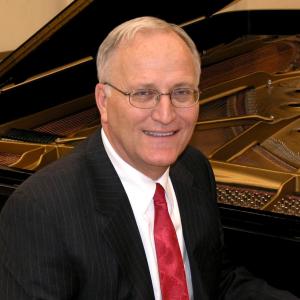 Professor Rex Woods has been appointed interim director of the Fred Fox School of Music.

An accomplished pianist, Rex has taught at the University of Arizona since 1988, and has served during nearly half of that time in administrative roles, including as associate director, interim director, and director of the School of Music.

For those of you who don’t know Rex, here are a few highlights from his biography:

Rex has performed in the United States, Canada, Mexico, France, China, and Australia, but is best known to regional audiences for his frequent artistic performances as both a soloist and chamber musician.  Rex has been the recipient of the Otto Guth Memorial Award from the San Francisco Opera Center for excellence in vocal coaching, and the Premier Prix de Fontainebleau in chamber music, among many other accolades. Rex received his musical education at Brigham Young University, the University of Arizona, the University of Southern California, and the American Conservatory at Fontainebleau. He also holds the degree of Juris Doctor from Arizona State University.

Rex began his new role last Thursday and has hit the ground running, participating in the Arizona Arts Leadership Retreat on Friday.  He has agreed to serve as interim director through June 30, 2020, or until a permanent director is hired.

Rex succeeds Professor Ed Reid, who stepped down as director of the School.  Ed will return to his full-time faculty appointment as Professor of Trumpet.

As you may know, Ed was instrumental in cultivating the relationship with Alan Fox that resulted in the $20 million gift to name the School after Alan’s father, Fred Fox, who passed away in May at the age of 104.  Under Ed’s leadership over the past four and a half years, the School successfully hired 30 new faculty members.  The School also launched a slate of UA Online course offerings; received donations for two concert grand pianos for the performance halls; named the Jeffrey Haskell Recording Studio along with the Dan and Marcia Molter rooms within that space; relaunched the Strings Project (with significant donor support); and signed a cooperative agreement with the Universidad Nacional Autónoma de México (UNAM); among many other accomplishments.

Once fall semester is underway, we will begin the process of launching a national search for the next permanent director of the School. In the meantime, please join me in thanking Ed for his service, and in welcoming Rex.