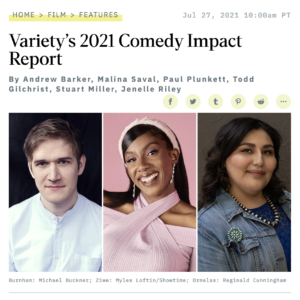 The School of Theatre, Film & Television is excited to track the continued success of alum Sierra Teller Ornelas (BA, ’05). After graduating, Teller Ornelas spent several years programming films for the Smithsonian’s National Museum of the American Indian in Washington D.C. before securing a fellowship at Disney and landing a script-writing job on the series Happy Endings. Production work on Brooklyn Nine-Nine and Superstore followed and most recently, she signed a multiyear contract with Universal Television and became showrunner, writer and executive producer of Peacock’s new Rutherford Falls.

In a story published this week in Arizona Alumni Magazine, Teller Ornelas reminisces about her involvement in the University of Arizona’s long-running Comedy Corner troupe. “First I was an audience member,” she says. “Then I ended up writing for them, and producing, and doing props and stuff. I always loved Saturday Night Live growing up, and always knew I wanted to do something comedy based.”

With the critical acclaim the series has earned, as well as a renewal from Peacock, Teller Ornelas says that the Native American community’s reaction means more than good reviews. “Without exaggeration, that matters more than good reviews,” she says. “When Native people tell me I’m ‘channeling Terry [Michael Greyeyes]’ before a meeting, I’m so grateful.”