The Neuroscience of Creativity

How can we tap the power of the brain to enhance our creativity?

Two new faculty members are making inroads in the field of neuroscience and creativity and bringing it to the realms of theatre and music. Andy Belser, Director of the School of Theatre, Film and Television and Molly Gebrian, Assistant Professor of Viola at the Fred Fox School of Music.

Belser is steeped in a creative inquiry that falls outside traditional neuroscience. For decades he has been exploring how body movement, breath, text, space and perception affects the actor.

Before beginning his post, Besler was a Professor of Movement, Voice, and Acting in the School of Theatre at Pennsylvania State University, and Founder of a research lab called ADRI (Arts & Design Research Incubator) in the Penn State College of Arts and Architecture. There he collaborated with researchers, artists and scientists, like Dr. Joseph Julian, lead Investigator in Applied Neuroscience, to create novel programming.

“We are bound by the bodies we have,” he says. “Our bodies inform our thoughts, actions and sensations. The brain is not a place. Our nerve endings go all the way out…in some ways, past our bodies. We are taking in information to our nervous system – a system – not a brain.”

Psychology, philosophy, body work, space, movement and perception. For Belser, all are inextricably linked. He and Dr. Julian will share this new language of understanding the brain in their upcoming book, “The Performer’s Field Guide to Applied Neuroscience,” to be published this year by Routledge.

What makes a great actor, great?
And a great musician?

Have masters in their fields arrived by repetitive actions or is it a matter of born genius?

New Arizona Assistant Professor Molly Gebrian offers students insights into learning and practicing music that make a world of a difference in their performance. With a Bachelor of Music in viola performance as well as a Bachelor of Arts in neuroscience from Oberlin, Gebrian has published papers on topics related to music and neuroscience and has taught courses on music and the brain at Rice University and at the University of Wisconsin-Eau Claire. 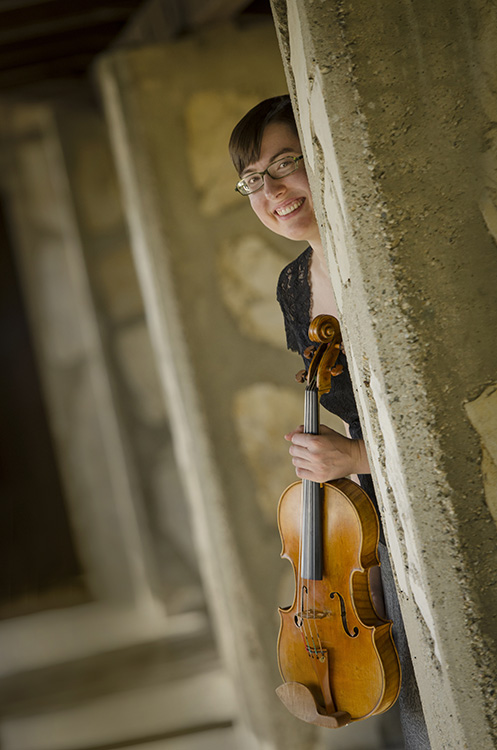 Gebrian is fascinated by learning and memory and how discoveries in these areas can help musicians in learning music and preparing for performance.

When she first decided to study neuroscience, she realized that what neuroscientists had discovered about how the brain learns is directly applicable to practicing. Musicians would be much more efficient and effective in the practice room if they were aware of this research.

One area of learning and memory research that has been especially interesting for Gebrian to explore is the research on blocked versus random (or interleaved) practicing. Often, musicians are taught to repeat things many times correctly to ensure they will do well in a performance (an example of blocked practice). “But when you get up on stage, you get one chance and you have to do it perfectly,” Gebrian says. “That’s a way more difficult and a different thing for the brain to do.”

Neuroscience research has shown Gebrian that, contrary to what most musicians think, following “random practice”—the term neuroscientists use to explain switching back and forth quickly between  different sections in a piece of music or different skills, allows the brain to practice switching gears quickly, a skill needed to perform well in front of an audience.

Of course, musicians must do blocked practice to make sure they can solidify their skills early on in learning a new piece of music. But as soon as they come on stage to perform, they may falter if they have only done blocked practice. Random practice has been shown to be more effective for performing well. And from the very beginning of learning something new, there is new evidence showing it may jumpstart and speed up the learning process.

Random practice can be frustrating and challenging and may seem counterproductive at the beginning, but it defeats what psychologists call “the illusion of mastery” musicians feel when they experience a false sense of complacency brought about by only doing blocked practice.

“As a musician begins to learn a new piece, the synapses get stronger and new synapses are being formed between neurons that weren’t there before,” says Gebrian. At the same time as this is happening, groups of neurons (called neuronal ensembles) become more and more streamlined in their behavior, creating a strong pathway.”

Every time you practice
or learn something new,
you’re changing your brain.

Belser would agree. “Are we teaching to the importance of the nervous system?” he asks. “It changes language; it changes everything.”

“We have focused on the brain as the operator of everything, and that is true,” says Belser. “But we have forgotten, it’s not that memory is stored in my toes. If I cut off one of my toes, I will have strange reactions because my toes have been a part of forming memories. That part of the body was part of something that experienced something and the brain is keeping that connection between the two.”

“Acting is the study of human behavior,” Belser says. 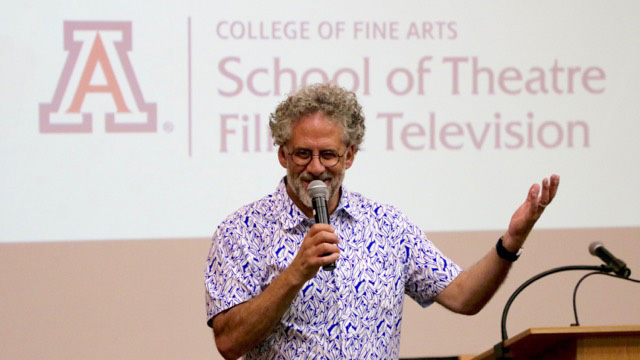 For years, Belser studied and was a practitioner of Feldenkrais, which focused on body movement awareness as a way to better connect to impulses and emotions. The process has been used to help actors explore deeper character development and expression. His upcoming book will be a way of understanding spatial and body awareness, memory and a sense of time, as well as the sense of prediction.

“Most acting teachers will say, “where’s the fear?” says Belser. “The fear is inside of you.  But fear is not inside of you. Fear is in your prediction.  It is a built-in, learned response in a relationship. That’s why actors are taught to visualize in advance the stage and the people. Fear has a visual aspect to it and an environmental aspect to it.  You’re not going to be afraid if you’re singing in the shower.”

By focusing on this perception of the body and mind environment, actors can learn how to better handle performance anxiety.

“Once you begin to understand that environmental aspect, then you can feel your own responses and you can put yourself in a relationship. The audience is not a mask. It’s hundreds of individuals. So, talk to them. It’s about reframing our expectations,” he says.

“Researchers have discovered that when a professional violinist is asked to finger a piece silently, their auditory cortex lights up as it would if they were actually playing (and hearing) the piece,” says Gebrian.

“The opposite is also true: when professional pianists hear a recording of something they can play well, their motor cortex lights up even though they aren’t moving. So for professionals, singing in your head as you play affects what comes out of your fingers because your auditory cortex is connected to your motor cortex. If you aren’t clear about what you want to hear, the auditory cortex will have a limited message to send to your fingers,” she says. “This is the type of connection that students should be practicing towards.”

“Mental practice is very taxing on your brain,” says Gebrian. “But it changes your brain in almost the same way as physical practice. It uses the exact same parts of the brain as when we actually practice, so it is an extremely effective practice method, especially in situations when it’s not possible or practical to actually play (like on an airplane, for instance),” Gebrian notes.

It isn’t just the lucky student who is privy to Gebrian’s knowledge. More and more she’s on the road, speaking at universities around the country about her findings.

“Hearing the science behind the practice convinces students that this is how you should be practicing. It takes advantage of how the brain works rather than being counter-productive,” she says.

Gebrian’s aim, like Belser’s, is to help give students and teachers a new way of approaching the learning process.

Whether an actor, musician, or a monk meditating on compassion, there’s a galaxy of untapped possibilities.

Being “creative,” after all, is embracing what it means to be human.