In a first-time collaboration, The University of Arizona School of Theatre, Film & Television and The Scoundrel & Scamp Theatre are co-presenting From the Fishbowl, a new fantastical work devised in collaboration with Theatre Studies and Design & Technical Production students and directed by physical theatre creator and TFTV guest artist Wolfe Bowart. Created during the winter of the pandemic, the production features seven actors gliding magically and seamlessly between stage and screen as they explore what it means to live in a world that has become both socially distant and yet somehow more personal.

In a recent interview with The Theatre Times, director Wolfe Bowart and lighting designer Forrest Tallbull reflected on the journeys that brought them to this theatrical moment, the process of devising physical theatre in a digital space, and what new value “a world interrupted” has brought to their theatre-making. 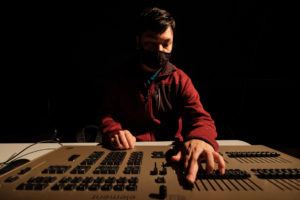 From the Fishbowl also served as Lighting Designer Forrest Tallbull‘s MFA Senior Capstone Project in Lighting Design. “From the Fishbowl features vignettes that combine our digital culture with the stage,” Tallbull said in the article. “The stories are about shared messages of emotional humanity that show our true selves—selves we evade in the digital world. When I arrived, there was no script or outline. Wolfe [Bowart, director] wanted to hear ideas from the entire creative team, including the actors, designers, and even the stage managers. Wolfe said, “you have the stage to talk the world—what would you say?” That was the starting point of the creative process. Designers not only contributed to the design elements of the spectacle; we were invited to tap into the emotional creation of the stories.”

The challenges inherent to physical theatre and illusion work are nothing new for director Wolfe Bowart, but this process came with unique challenges to surmount in this changed creative space – especially when it came to devising, rehearsing, and performing digitally: “For the most part From the Fishbowl was rehearsed and then filmed separately in students’ own living spaces, and finally, onstage,” Bowart said. “That in itself was a challenge as actors are not looking at each other live but interacting with imagined characters. This is not unlike working with CGI characters and motion capture and, in fact, several students experimented with a green screen set-up that made the rounds. We never once got together as a group and when we filmed the live staged parts of the production, we had one hour with each student/actor in the space with no other actors.”

Watch the magical result online now. From the Fishbowl streams online April 1 – 18, 2021. Watch any time, from anywhere. Tickets are $11 per device.


Read more at The Theatre Times


Get tickets to From the Fishbowl

The post The Theatre Times talks with “From the Fishbowl” creatives Forrest Tallbull and Wolfe Bowart about devising theatre in a world interrupted appeared first on School of Theatre, Film & Television.