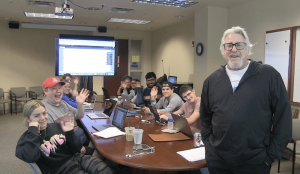 Brian Levant stands with the participants of his Sitcom Boot Camp. Image courtesy of Brian Levant.

The world premiere of “School Spirit” is set.

This Thursday, Oct. 17, local actors will perform a script written by Arizona students at the TV Comedy Pilot Table Read for ‘School Spirit” at the TENWEST Impact Festival.

A small group of students in the School of Theatre, Film & Television developed the script for the 30-minute TV comedy pilot in an eight-week Sitcom Boot Camp, led by Arizona alumnus Brian Levant, an award-winning writer, producer and director of television classics, “Mork & Mindy” and “Happy Days” and a director of feature films.

The plot of “School Spirit” revolves around a ghost who helps a down-on-his-luck, pushover, fraternity student navigate his freshman year at the University of Arizona, said Boot Camp participant Will Harmon.

Harmon’s favorite scene from the pilot episode is when Stacey, the protagonist, and Stork, his ghost guide, explore outside of the dorms.  “It’s the most fun, upbeat and comical part of the script,” Harmon said.  “It’s right around the second act and is a perfect change of pace.”

Harmon is extremely proud of the final pilot script and is grateful for the personal growth that he witnessed because of the Boot Camp.

“There are a lot of brilliant and strong-minded people and writers in our course, and it was challenging for me to inject myself into situations at times,” Harmon explained.  “However, even in the short time in class, it became easier for me.”

Experience in a realistic writing room also taught Harmon that it is okay to be yourself and express your views and opinions.  “It’s okay if people disagree with you,” Harmon said.  “It’ll happen to literally everybody, but the second you stop being yourself is when your purpose in the writing room starts to diminish.”

Greg Rencken, another student in the camp, fondly remembers an instance when differing views were expressed.  “My favorite memory was when we were pitching ideas for what we wanted our sitcom to be about,” Rencken recalled.  “We were a diverse group of people with very different experiences and that reflected in the ideas we all shared.”

For Rencken, the most challenging aspect was the time restraint.

“We had to create a sitcom, an entire world with colorful characters and a fun story in under seven weeks.”

With an expedited timeline, the participants benefitted greatly from the guidance and experience of Levant.

“It was great learning about his experiences in Hollywood,” said student Pooja Dutta. “He gave us real advice about what it’s like in a writer’s room.”  Dutta was also encouraged by his insistence that there are no bad ideas, and that everyone should speak up and voice their thoughts freely.

Levant is motivated in helping the next generation of writers and filmmakers find success in a competitive field.

“My satisfaction comes from giving student screenwriters and filmmakers a leg up in surmounting the wall that separates them from the professionals,” Levant said.

As for his students’ growth and performance throughout the experience, Levant said, “I genuinely believe that my class has a better understanding of how to create memorable characters, constructing stories and scenes and writing crisp, witty dialogue.

Co-Presented by the Hanson FilmTV Institute and the UA School of Theatre, Film & Television, this event is made possible with support from Film Tucson, a division of Visit Tucson.