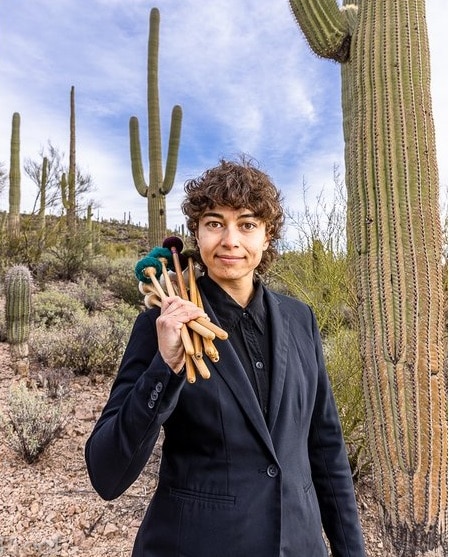 Alana Wiesing is a multi-faceted and award-winning timpanist and percussionist from Phoenix, AZ. She holds a Master of Music degree in percussion performance from the Indiana University Jacobs School of Music in Bloomington, IN, where she also completed her undergraduate studies. Her primary percussion instructors were Bill Wanser and John Tafoya, and she has completed additional studies most notably and extensively with David Herbert, Cynthia Yeh, Joseph Pereira, Ed Stephan, Markus Rhoten, Richard Weiner, Jauvon Gilliam, Eric Shin, Keith Aleo, Michael Spiro, Jonathan Haas, and Doug Howard. Alana’s summer festival activities include the Eastern Music Festival (2007, 2008), the Interlochen Arts Camp (2009, 2010), the Chosen Vale International Percussion Seminar (2011), the Indiana University Summer Music Academy (2013), the National Orchestral Institute (2015, 2016), and the Aspen Music Festival & School (2016, 2017, 2018, 2019). She actively performed, recorded, and freelanced with countless orchestras and ensembles during her time in the Midwest, notably serving as the Principal Timpanist of the Columbus Indiana Philharmonic and the Terre Haute Symphony Orchestra as well as a regular substitute and extra percussionist with the Indianapolis Symphony Orchestra and the Fort Wayne Philharmonic.

Alana is currently based in Tucson, AZ. She is the Principal Timpanist of the Tucson Symphony Orchestra, where she was also elected to serve on the program advisory committee. She is a passionate educator, instructing as an Adjunct Professor of Percussion at the University of Arizona Fred Fox School of Music and an alumni faculty member at the National Orchestral Institute + Festival as well as operating her private teaching studio. Since her arrival in Tucson, Alana has presented masterclasses and clinics for the Percussive Arts Society International Convention (PASIC), National Orchestral Institute + Festival, the Network for Diversity in Concert Percussion (NDCP), Virtual Percussion Music Festival (VPMF), Michigan State University, George Mason University, University of Florida, Western Carolina University, Benedict College, the Arizona PAS Day of Percussion, and the University of Arizona. She has been a guest Principal Timpanist with the National Symphony Orchestra, and she also performs with the Arizona Musicfest Festival Orchestra as a timpanist and percussionist.

Alana currently serves as the President and Chair of the Board of Directors for the Network for Diversity in Concert Percussion (NDCP), a collective of performers, educators, and businesses who serve as a resource for, and support to, aspiring professional percussionists from underrepresented and underserved communities in an effort to improve equity, diversity, and inclusion in the concert percussion community. She participated in a virtual roundtable to discuss breaking racial barriers in the education and performance world through the Percussive Arts Society and its Diversity Alliance, and she has appeared on numerous podcasts and platforms to discuss these topics of personal impact. Additionally, she serves on the executive board of the Tucson Federation of Musicians (TFM, Local 33).