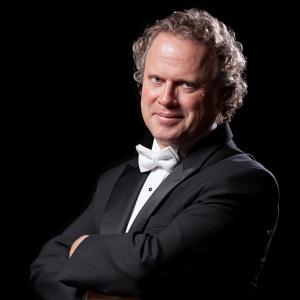 Dr. Thomas Cockrell has served as the Nelson Riddle Endowed Chair in Music, director of orchestral activities and music director of the UA Opera Theater since 2000.Cockrell is equally at home on the symphonic podium and in the opera pit, working with professionals or student musicians. Since 2010 he has served as artistic director of Opera in the Ozarks at Inspiration Point, a training company and festival founded in 1950, which he had previously served as music director from 2003-2005.

He has conducted the professional symphony orchestras of Dallas, Cincinnati, Phoenix, Tucson, Louisville and Boulder, as well as several in Romania, Italy, Mexico and South Korea. Operatic credits include productions for Dayton Opera, Opera Colorado, Opera Theatre of the Rockies and Washington D.C.'s Summer Opera Theatre. He served as the associate conductor of Cincinnati Opera, Opera Colorado, The Colorado Symphony Orchestra and the Spoleto Festivals and music director of Denver Young Artists Orchestra. He was a member of the conducting faculty of the Interlochen Arts Camp from 2006-2008. For the 2014-15 season he served as interim conductor of the Phoenix Youth Symphony, the senior orchestra of one of the nation's premier youth orchestra programs.

Cockrell frequently is the conductor and clinician for regional and all-state music festivals. In 2008 he was the conducting master teacher for the College Orchestra Directors Association national conference and is increasingly sought after for conducting master courses in the USA, Mexico, Asia and Europe.

Before coming to The University of Arizona, Cockrell was on the faculty of the University of California, Irvine and the State University of New York at Purchase. He has been a visiting professor at the National Academy of Music in Bucharest, Romania and a faculty artist at the Academie Internationale de Musique, Chateau de Rangiport.

Cockrell earned his Doctor of Musical Arts and Master of Music degrees from the State University of New York at Stony Brook and a Bachelor of Arts from Yale University. He studied conducting with Franco Ferrara in Rome and at Accademia Musicale Chigiana in Siena, Italy. Additionally, he was an Aspen Conducting Fellow and completed advanced training at the Conservatoire Americain in Fontainebleau, France and the Tanglewood Music Center, where he worked with Gustav Meier, Leonard Bernstein and Seiji Ozawa.