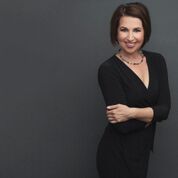 Mezzo-soprano KRISTIN DAUPHINAIS is highly regarded for her artistry and versatility. She has worked in a variety of genres including musical theatre, opera, concert, oratorio, chamber music and solo recitals. Her performing career has taken her throughout the United States as well as internationally with tours in Italy, China, Australia and additional concert performances in Germany, Spain, Austria and Luxembourg. As an orchestral soloist, Dr. Dauphinais has been often featured in works by Manuel de Falla including Siete canciones populares Españolas, El amor brujo and El sombrero de tres picos with orchestras such as the Phoenix Symphony, Tucson Symphony the Southern Arizona Symphony, and the Catalina Chamber orchestra.   Additional performances as a featured soloist with orchestra include Alban Berg’s Sieben Frühe Lieder with the Arizona Symphony, Mozart’s Exultate, jubilate with the Apperson Strings and again with the Cadillac Symphony Orchestra, and Easy to Love – a review of Cole Porter, Richard Rodgers and Jerome Kern with the Sacramento Choral Society and Orchestra as well as Mozart’s Coronation Mass and Requiem, Mendelssohn’s St. Paul, Haydn’s The Creation, and Handel’s Messiah, narrations with chamber orchestra in William Walton’s Façade, and Stravinsky’s A Soldiers Tale.

On the operatic stage, her recent roles include Dorabella in Così fan tutte, Hänsel in Hänsel und Gretel, Mrs. McLean in Susanna, Zweite Dame in Die Zauberflöte, the title role in Handel’s Xerxes and the role of Ottone in the American professional première of Vivaldi’s “Ottone in Villa” for the 2007 Arizona Vivaldi Festival.