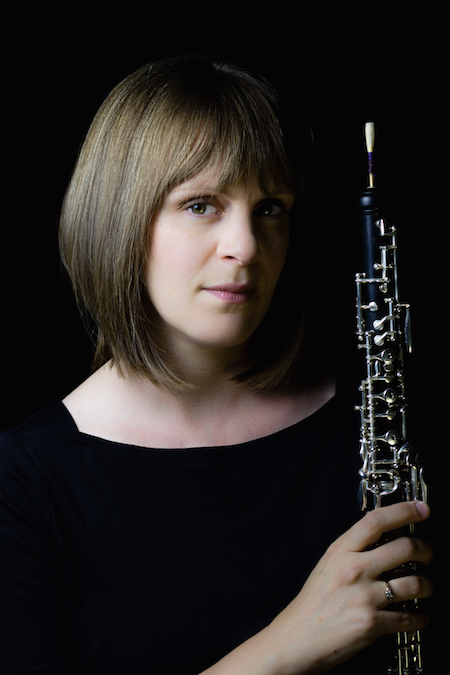 Sara Fraker is Associate Professor of Oboe at the University of Arizona and a member of the Tucson Symphony Orchestra. She spends her summers in residence as a Faculty Artist at the Bay View Music Festival in northern Michigan. She is principal oboist of True Concord Voices & Orchestra and a featured soloist on their two recent album releases, one of which garnered two Grammy nominations.

Sara is currently engaged in a diverse array of creative projects. In 2021, she commissioned Australian composer Lachlan Skipworth to create a piece for reed trio and electronics, inspired by tree-ring data and the climate crisis. The piece will be premiered in December 2021 at the UArizona Laboratory for Tree-Ring Research. The recipient of a 2020 UArizona Production Grant, Sara is working with an interdisciplinary faculty group to bring this project to fruition. She is also producing a world-premiere recording of the woodwind music of ultramodernist composer Johanna M. Beyer (1888-1944) for New World Records, with new print editions for Frog Peak Music. In March 2022, Sara will premiere an exciting new commission for oboe and piano by composer S. Maggie Polk Olivo, entitled White Sand & Gray Sand.

Sara was awarded a 2017 Artist Research and Development Grant from the Arizona Commission on the Arts for a solo commissioning and recording project, in collaboration with composer Asha Srinivasan and ecologist Robin Wall Kimmerer. The resulting piece, Braiding, was featured on CBC Radio in 2020. An advocate for interdisciplinary creative work, she recently joined the affiliated faculty of UArizona’s Institutes for Resilience: Solutions for the Environment and Society (AIR).

Sara has presented recitals and master classes across the US and in Canada, Mexico, Japan, Australia and the Tohono O'odham Nation. In additon to recitals at five recent conferences of the International Double Reed Society, Sara has also presented her work at the CMS National Conference in Vancouver, BC. At the University of Arizona she has taught oboe pedagogy, reedmaking, oboe techniques for music education majors, Music in World Cultures, and chamber music. Sara is a member of the Arizona Wind Quintet, UA's faculty ensemble-in-residence, which has enjoyed performances across Southern Arizona and in Los Angeles, El Paso, Ciudad Juárez, and La Facultad de Música (UNAM) in Mexico City.