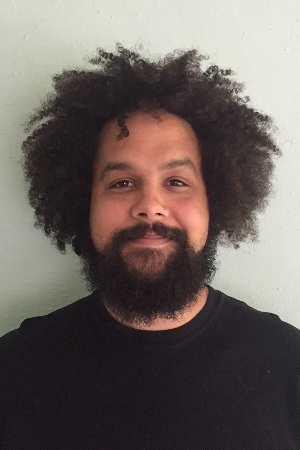 Aaron is a mixed media artist and printmaker creating works focused on political and social issues. He combines imagery from comic books and stained glass windows to raise questions concerning misconstrued belief systems and twisted moral values in our society. Aaron’s background in hip-hop culture and street art remains as a major influence in his fine art practices.

Aaron has exhibited internationally and received numerous awards, scholarships and fellowships for his work in lithography and mezzotint. Aaron’s work can be found in the collections of The University of Colorado, Wichita State University, the Ino-cho Paper Museum in Kochi, Japan, The Yekaterinburg Museum of Art in Yekaterinburg, Russia, and the University of Tennessee Knoxville’s Ewing Gallery Collection and among many other public and private collections.

Aaron is a husband, a dog lover and a workaholic.