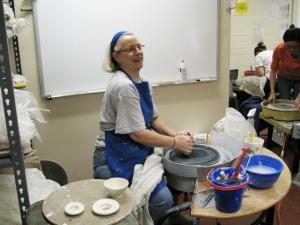 Aurore Chabot is Professor of Ceramic Art and has taught at the University of Arizona since 1988. Her status as artist and educator in the field of ceramic art has been recognized by her election to Director-at-Large from 1999 to 2001 and appointment to Publications Director from 2001 to 2004 on the National Council on Education for the Ceramic Arts (NCECA) National Board of Directors. She was appointed to the NCECA Nominations Committee for Fall 2012 and Spring 2013 to offer advice on Board and national award nominations. She has completed two major national public art commissions, received two NEA individual artists grants, been invited to numerous visiting artist engagements, and her work has been included in over 100 national and international exhibitions and numerous books and periodicals. Included in many public and private collections, her work was included in an international invitational exhibition at the Taipei County Yingge Ceramics Museum in Taiwan where one of her sculptures was purchased for their collection. She completed a fall 2011 sabbatical leave during which she traveled to numerous museum collections to research Tibetan Buddhist art and iconography. Through contemplation and study of material collected, she is currently translating her observations and responses into works of art on paper and in clay. She exhibited some of her new work in summer 2012 at the A.I.R. Gallery, Brooklyn, N.Y.