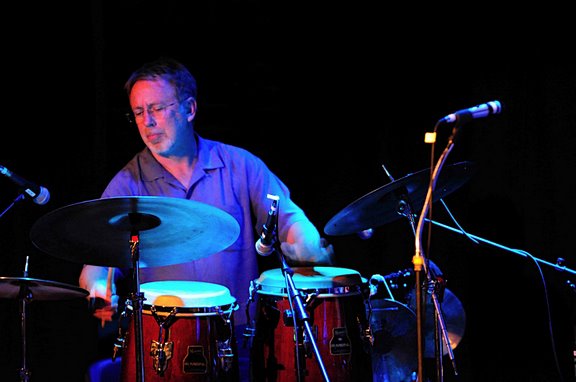 Joe Venegoni is regarded as one of the most innovative artists performing today. Venegoni appears in concert at performing art centers, festivals, and jazz clubs that range from Cité de la Musique, in Paris, Cami Hall in New York, to Yoshi’s Jazz Club in Oakland, with many places in-between.  His music, both recorded and in live performance, is featured on National Public Radio’s, All Things Considered, World Café, Echoes, and All Songs Considered.  His recording, Open Road, was named by Richard Price, Bay Area Music Magazine, as one of the “Top 10 Albums” of the year.

As a commissioned composer for dance, Venegoni has created scores for the “who’s who” of dance companies and independent choreographers including: Robert Moses’ Kin, Janice Garrett & Dancers, and Arturo Fernandez’s Left Coast Dance. His expertise in creating an Asian aesthetic proved to be of great benefit: Venegoni was commissioned to write scores for Alleluia Panis’s Philippine based company, Kulintang Arts, and became Musical Director for Sue Li-Jue’s Facing East Dance & Music.

Venegoni has produced and directed over thirty studio recordings and appears as guest artist on over twenty albums with such artists as, Fareed Haque, Carl Weingarten, Michael Manring and the all improvisational group, Cloud Chamber.

In 1990, Venegoni was invited to Stanford University to conduct an eight week workshop by Dance Director, Diane Frank. That assignment turned into fourteen years as artist in residence with the Dance and Drama Departments. Additionally, Venegoni has served as a guest artist at The Juilliard School, ODC/SF, U.C. Berkeley, Cal Arts and Washington University.

Venegoni is a recipient of awards and grants from the National Endowment for the Arts, the Zellerbach Family Fund, the Missouri Arts Council, California Arts Council, and a prestigious New Work Fellowship from the Marin Arts Council. Joe currently serves as a guest lecturer/senior accompanist at the University of Arizona, School of Dance.