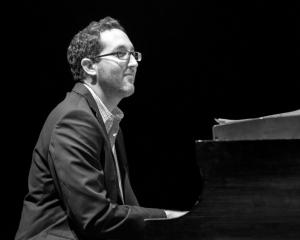 Jazz pianist ANGELO VERSACE, a native of Indiana, Pennsylvania, has been the director of jazz studies at the University of Arizona since 2014. He attended William Paterson University from 2004-2008, studying with Mulgrew Miller, a seminal figure in jazz and a man whom Versace cites as being a main musical influence. He subsequently earned his Master of Music and Doctor of Musical Arts degrees from the University of Miami, studying jazz piano, jazz pedagogy, composition and arranging. During his time in Miami, Versace was on faculty at the Superior Academy of Music – an award-winning institution backed by the Royal Conservatory Music Development Program. He also was on faculty at the CGCC Community Arts Program and Dillard High School – high school jazz band programs that found success at the prestigious Essentially Ellington competition. He began to work for the Tucson Jazz Institute (the two-time winner of the Essentially Ellington competition) after his move to Arizona in July of 2014.

Versace has performed on twelve studio albums: two as a leader and ten as a sideman, including Jazz Hymns with guitarist Jerry Hahn and Kristian 3.0 with Take-6 vocalist, Khristian Dentley. He has also had the privilege of working as a sideman with several internationally recognized artists: Lewis Nash, Warren Wolf, Marcus Printup, Brice Winston, Joe Saylor, Troy Roberts, Dave Stryker, Roxy Coss and Chuck Israels. Versace travels yearly to Taipei, Taiwan where he is on faculty at the Fu Jen University Jazz – a camp which coordinates with the American Institute of Taiwan Jazz Outreach Program. Most recently, he has been a member and appointed board director of the newly minted Tucson Jazz Collective (TJC). The group, which has performed for the SAACA Jazz Legends Concert with vocalist, Becca Stevens, continues to perform in and around Southern Arizona.